Allow me to start by stating that Seoul is now my favorite city in the world.  I love the fast paced energy.  It is similar to that of New York, and it both fuels and focuses me.  I love how you can get lost in the crowd.  Many people don't like that aspect, but I've never been turned down for help when I have asked for it.  I love the tall buildings, and I enjoy riding the subway.  I downloaded a map to my Ipod, and it was easy to figure out.  The Korean ladies dress differently, and well.  They wear modest tops, short skirts, and high heels.  I am amazed at how fast, and seemingly comfortable, that they are able to walk in them.

I didn't eat much Korean food there.  The first place I went after finding my hostel, and unloading my bags, was Itaewon, a district in Seoul where most of the westerners are.  A lot of western restaurants are in Itaewon.  I went there because I had a strong craving for a half pound homemade style hamburger with fries, and figured that that particular area would be the best place to find one.  I found a "hole in the wall" restaurant off of the main road, and I ordered a jalapeno ranch burger with fries, and a sprite.  It was delicious, filling, and hit the spot.

One of the only Korean meals that I ate in Seoul was a delicious noodle dish with dumplings, called kalguksu.  It was the most memorable meal that I ate in my previous visit, and I had to have it again.  The problem was that I had no clue as to where the exact restaurant was, but I knew it was famous among Seoulites.  So I stopped a random lady on the street, and asked her, "Kalguksu Odee eetseyo? (Where can I find kalguksu?)"

The lady replied, "Myeongdong."  And I had the feeling that she knew the exact restaurant that I had in mind, so I immediately made my way there.  Myeongdong is a shopping district in the heart of Seoul.  There is a North Face store, an Apple store, and a Lacoste store among seemingly thousands of others.  It was immensely crowded.  I walked around the district, and perused the stores, as I searched for the restaurant.  I knew there would be a long line in front of it, so I looked for that, and eventually found it.  There was a line of probably 75 people, but it moved fast.

The kalguksu, and the kimchi was just as I had remembered it.  I am a texture eater, and the texture of the noodles was amazing.  Every family, and restaurant that serves Korean food in Korea, makes Kimchi.  And no two recipes are the same.  I love tasting the differences in people's recipes.  Here is a picture of the kalguksu served at the restaurant in Myeongdong. 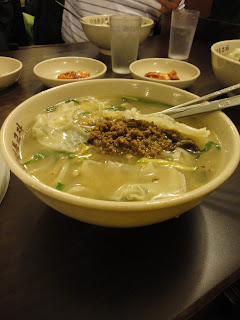 I have a confession to make.  I didn't take a single picture on this visit.  The pictures that I am using are from the previous trip, but I'll assure you, the kalguksu looked and tasted exactly the same.
Monday was Memorial day in Korea, so I made my way to Seoul National Cemetery to pay my respects to my Uncle, who is buried there.  He was killed in the Korean war when my mother was a young girl.  She speaks glowingly about him, as he was a great man, and is a huge reason why my mother is a christian today, as he was the first person to tell her about Jesus.  Both my mother, and my uncle in New Orleans are fantastic singers, and he taught them both how to do so.
Seoul National Cemetery was extremely crowded on Monday, and I was the only foreigner there, among thousands of Koreans.  There were numerous venders selling flowers and food.  And the most interesting thing to see was how Korean families payed their respects.  Most brought food, and had picnics at the respective gravesite of the person that they were paying respects to.  It was beautiful.  Children were everywhere, and teenagers volunteered to help those who were unfamiliar with the area.  The teenagers were simply being teenagers, and were rambunctiously goofing off, while being helpful on the few occasions that people actually needed help.  I found it to be funny.
I had pictures of my uncle's grave saved in my ipod, so I went to the information office, and showed them to the attendant.  He marked exactly where it was on a map of the cemetery, and I made my way there.  As I did so among all of the people, I couldn't help but feel proud, and emotional.  My uncle was among all of the fallen heroes that this holiday was dedicated to.  And not only that, I was proud because he was a wonderful man who had a profound effect on my mother, and thus our family.
Again, I didn't take a single picture on this visit.  I forgot to bring my camera, and wasn't thinking about photo ops.  But to give you a frame of reference, here are a few pictures from my previous visit.  Just picture sunny weather, and the cemetery being a lot more crowded with people picnicking on various grave sites. 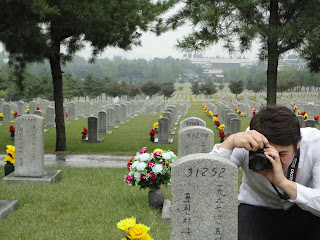 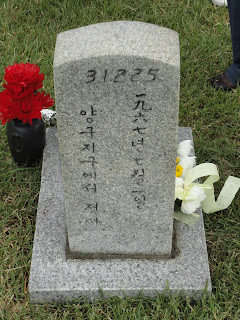 I'll have more on my visit to Seoul in my next post.
Posted by Chris Polk at 8:47 AM