I would like to start by congratulating my brother, Ben, and his wife, Buff, on their new baby, Benjamin Graves.  I would also like to congratulate my parents on their first grandchild, as well as Buff's parents, Mr. Ronnie, and Mrs. Connie on their third grandchild.  I would also like to congratulate my little brother, Jon, on his recent marriage to his wife, Sarah.  It was a big week for our family, and it's times like these when I wish I were home celebrating with them.  I wish each of you the best as husbands, wives, parents, aunts, uncles, and grandparents.  That goes without saying, because I know all of you will do fine.

I am writing this post from a coffee shop in Haeundae beach in Busan, South Korea.  Busan is a coastal city on the southeastern tip of the Korean peninsula.  It is an enormous city, roughly the size of Los Angeles.  And I arrived late last night.  My first impressions of the city are that it is absolutely gorgeous.  Numerous high rise apartments are among a sea of mountains, and small buildings line the foothills.  It's a beautiful sight at night.  I came here to take a ferry to Fukuoka, Japan, but decided to stay in Busan for the next couple of days, because I like it here so much, and because an overnight stay in Fukuoka was not worth the price of the ferry.  I think I will plan a proper trip to Tokyo and Osaka within the next couple of months, but for now, I am content perusing the beaches and city life here.  I have no major plans for this trip.  The only plan that I have is to relax, wake up late, walk around, eat some good food, and enjoy the great scenery.  Maybe I am different than most, but I don't like vacations with a full itinerary.  Itineraries make me tired.  And I want to return from a vacation recharged, not more exhausted.

I've recently had a case of writers block, and I have been unable to shake it.  I've started a few posts, and have been unable to finish them.  I guess I have a desire to write something great and captivating, and I find myself stuck in the middle of a piece, feeling as if I failed, before erasing it all together, and starting over.  With this post, I have decided to fight through it, and post it however it turns out.

I recently had two separate, but similar conversations, with my friends, Dean and Brett.  We talked about the similarity between art and relationships.  They are similar in that if you go into them with a certain expectation, you will almost always fail.  If you go into a painting, a writing, or any other form of art with the expectation of what it will be like in the end, you will always be stuck, and/or disappointed.  I think my writer's block has come from the fact that I have had a certain expectation of my writing.

Relationships are similar in that if you go into them with a similar expectation, it will fail.  I think the only expectation that one should have in a relationship is to have fun, and it should not be dependent on the other person.  It depends solely on you, the individual.  If you are having fun, and are naturally happy and content, it will be evident to the other person.  Unfortunately, desperation is also evident.  And nothing turns off another person more than desperation.  And the expectation of something more, or less, than the simple notion of having a good time will always lead to desperation and loneliness.

It can be compared to getting in your car, and driving for the simple purpose of discovering where a particular road will take you.  An effective work of art will give the artist a greater knowledge about his or herself, and will lead to discovery.  A good relationship, like art, will lead a person to discovery, and will enable a person to see things the way he/she has never seen them before.

I'm not saying that life should be undertaken haphazardly with absolutely no goals and expectations.  One should always have goals as to what they would like to become in terms of success and careers.  Goals give us focus.  In the realm of careers and competition, desperation can lead to success.  If you watch a football game between two evenly matched teams, most of the time, the team that is more desperate for a win will win the game.  Many times, a salesmen does his best work when he is desperate for money.  But that is not the case with art and relationships.

A few weeks ago, some friends and I took a trip to a small island off of the west coast of Korea, called Seonyudo.  The island was too small for cars, so everybody got around on bikes and golf carts.  It was a rainy weekend, but it stopped just long enough on Saturday for us to explore on bikes.  I thought the rain made the island, and the mountains more beautiful.  The rain clouds created a fog that covered the top of the mountains.  It was gorgeous.  It was a fun trip with some good friends that I made here in Korea, and we ate well. 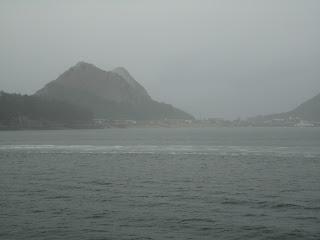 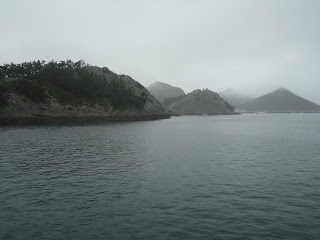 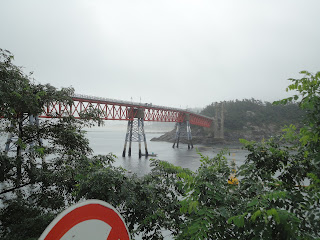 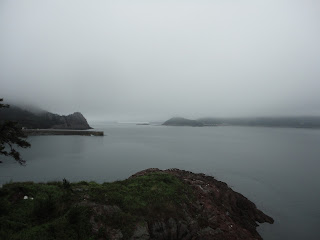 I should have some pics of Busan in a later post.  Have a good next few days everybody.
Posted by Chris Polk at 6:06 PM