A great piece of advice that I got before leaving for Korea was to "bring the one thing that you absolutely know you will miss, even if it costs money to put it on the plane, or to ship it."  It was a great piece of advice that I heeded.  I brought my acoustic guitar.  I know some of you will be asking, "Why didn't you just buy a cheap one in Korea?  It wouldn't cost much more than the price of checking it on the plane."  My answer to that is my Taylor acoustic guitar is my companion, and if I left it behind, playing a cheap one in Korea would cause me to miss it even more than not playing one at all, and I would never be able to stop playing.  On the flight from New Orleans to Los Angeles, I carried it on the plane.  On the Asiana flight between L.A. and Seoul, the compartments were too small for me to carry it on, so I had to check it, which costed fifty dollars.  I knew I would miss both of my guitars, and bringing my acoustic was worth it.

I realize that you may find this to be rather bizzarre, but I name my guitars and guns.  I'll start by quickly sharing the names of my guns.  My 12-gauge shotgun is definitely a female.  I gave her the name, Bernice.   I also have an SKS assault rifle that is undoubtedly a male, and I named him Rico Suave.  I am not a hunter.  I am a "city boy," and although I can count the number of times I've been hunting on one finger, I do believe in exercising my second amendment rights as an American.  I believe in protecting oneself in the case of an emergency.  I also love to occasionally go out and "pump lead" in a country field.  Not much feels better than destroying a watermelon, or watching a two-liter of coke explode.  Shooting a gun feels amazing, as does playing a guitar.

Before coming to Korea, I tried to make it as a traveling singer-songwriter, and I didn't succeed as a professional musician for two reasons.  I didn't work hard enough, and I simply wasn't good enough.  I am not bitter, and I don't regret pursuing my dream.  A blessing that came as a result of my pursuit is that writing lyrics has made me a better writer of prose, as I focus just as much on the flow of my words as I do the content.  Contrary to what one might believe, my love for music has grown exponentially since my pursuit.  Music relaxes me, and enables me focus.  The only thing that feels better than hearing an amazing song is performing one in front of people.

I currently own two guitars.  My acoustic guitar is definitely a male that I named, Jake, and as I stated earlier, he is here with me in Korea.  Bringing him was one of the best decisions that I made regarding my time here.  I play and sing on the worship team at my church, and that has been an amazing blessing in itself.  I still write music, but not nearly as frequently as I used to, but when I do, I take comfort in knowing that my companion is with me to be my aid in inspiration.  Every once in a while I still get the itch to perform, and whenever an opportunity arises, I have Jake with me to "blow minds (not really)."  I also enjoy "fine-tuning" my singing and playing quietly alone in my apartment, as I find that to be one of the most soothing things a human can do.  Squeezing the neck, pressing the strings, strumming, and quietly matching the tone and rhythm of my voice to that of a guitar other than Jake, here in Korea, would just not be the same.

My other guitar is an electric, and is a female.  She is a black Fender American Standard Telecaster that I named, Rosalyn, but I call her Rose.  Rose has a white pick guard, and was a graduation gift that I received from my parents upon finishing my studies at LSU.  My older brother received a beautiful gold graduation ring, and as much as I would love to have such a meaningful symbol that is such a wonderful source of pride, I asked instead for the guitar of my dreams.

I plug Rose into a Fender Twin Reverb guitar amp.  It's called a twin because it has two twelve inch speakers that sit side-by-side.  Rose and the Twin Reverb together are capable of blowing the roof off of any large building.  It is also capable of blowing down most brick walls.  I don't understand why they ever used sledge hammers bring down the Berlin Wall.  I have a few petals (no pun intended) for Rose, one being a Keeley modified Ibanez Tube Screamer, which gives it a nasty distortion sound with a vibration that feels absolutely incredible in the chest when the volume is high.  I would have loved to have brought her here to Korea, but that just wasn't feasible, being that the amp is enormous and extremely heavy, and not to mention, toting along the petal board, which would have been counted as another checked bag.  An acoustic is a lot more practical here, because of it's portability.

Rose is one of the things that I miss most about home.  I get excited, and my heart beats a little faster every time I think about plugging her into my petal board, plugging that pedal board into my Fender Twin Reverb, flipping the switch, watching that red light on my amp begin to brightly glow, turning up the volume before squeezing Rose's neck, and pressing my fingers against her strings that stretch above her rosewood fretboard.  I would then tap my foot on that green Ibanez TS9 Keely modified Tube Screamer pedal to activate the distortion, and authoritatively hit a chord, as I begin to feel power at my finger tips.  I get chills thinking about it, and when I lay in bed at night, if I am not careful, and I think about it too much, I won't be able to sleep.

I miss Rose, and can't wait to play her again, but it is also comforting to know that my faithful companion, Jake, is here with me here in Korea to aid me in my joy, my pain, and my worship.  I am also excited knowing that Rose will be at home waiting for me on my return.  I can't wait to get back.

This week, we had writing tests at school.  Some of my students never cease to amaze me, and one of my sixth graders, Jenny, is among them.  She has always been such a kind girl in class, who has such a pleasantness about her, as she always playfully asks me if she could wear one of the Angry Bird badges on my jacket, or if she could keep one of my red pens.  Before reading this, I never knew that a sixth grader was capable of possessing such wisdom, along with the ability to express it so profoundly.  I almost tear up thinking about it, and if you knew her, and saw her wonderful humility, along with her work ethic, you probably would too.  I'll let you read what she wrote in response to the question, "If you had a time machine, what time period would you like to visit?"  I know that the future of our world is in good hands. 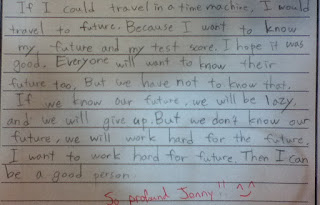