Puttin' the Hammer Down

Contrary to popular belief, nice guys definitely finish first.  People may not reward the nice guys, but God definitely exists, and he is a God who makes "karma," or whatever else that you want to call it, a reality.   I am living proof that God rewards the nice guys.  But there are few exceptions to the rules.

I teach second to sixth graders.  And when I first came to Korea, I thought I would enjoy teaching the older kids more, because older kids speak better, and know more.  My thoughts were that I would be able to have deeper conversations with them, because of their maturity.  I thought that teaching more complex concepts would be funner.  I also made the mistake of thinking that they would be receptive to my teaching.

With all of my classes, upon meeting them, I projected the "nice guy/teacher" image.  The younger students (2nd grade - 5th grade) abide by the principle of respect being a two-way street.  You give somebody respect, and they will give it back to you in return.  The younger kids, for the most part, have been receptive to the "nice teacher" image, and have been absolutely wonderful, and a lot of fun to teach.  My favorite level to teach is the fourth graders.  They know enough English to converse.  They have a developing maturity, and an understanding of what's expected of them.  And yet, they are still kids, and might I add, respectful kids.  Their lessons are still relatively simple, so preparation is short and easy.

The "two-way street" principle applies to less than ten percent of all sixth graders that I teach.  There may be one or two kind students in each of my sixth grade classes, and the rest are some sort of combination of loud, defiant, uninterested, and disrespectful.  The sixth graders enjoy testing the teacher to see how close to the limit they are able to push the "nice teacher."  Since the beginning, they have gotten progressively louder, and more disrespectful.  And three days ago, I snapped...  in a controlled manner.

I always pray that God would give me wisdom in discipling difficult students.  It is simply not in my personality to be stern and strict.  I would rather be kind and flexible, but this week, I have learned that sometimes, you just have to "put the hammer down."  And by "putting the hammer down," I mean recognizing the ring leader, and taking him/her out, and also showing no mercy to the good students who associate with them, and encourage their behavior.  When reading the rest of this post, it may enhance the effect to sing the song, "I feel pretty..."  from the movie, Anger Management.

Last Tuesday, one of my sixth grade classes was being especially irritating.  They were being so loud that I had to shout to get anything done.  Then I saw one student very defiantly doing his math homework in my class, and I snapped.  Only recently have I learned to, like a light switch, turn my anger on and off.  In this instance, I switched it on.  And for some reason, I am able to focus when I am angry.  I authoritatively snatched the homework off of his desk, and angrily exclaimed to the entire class while holding the math homework above my head,  "DO.  NOT.  DO.  MATH HOMEWORK.  IN.  MY.  CLASS!!"  It was in a totally different tone than the previous yelling, so students were caught off guard, and the class was silent.  I kicked the caught student out of the classroom.  I noticed how well that worked, so the next time I heard the slightest peep out of the ring leader, I kicked him out of the class too.  Then one of the students had the nerve to take their math homework out again, but this time for some reason, he passed the paper work to one of the few good students in the class.  I caught the good student red handed.  I gave her the most menacing look that she had ever seen in her life, snatched the math homework out of her hand, and yelled, "GET OUT!!"

"But teacher, It is not mine,"  she desperately replied in a Korean accent.

She immediately left her seat, and the classroom.  I later let them back in, and they sat in their seats embarrassed and silent, while the other students fearfully paid attention to, and participated in my lesson.  After class, I reported each offender to their Korean teacher to face further punishment.  Each student of English at my school has a Korean teacher who teaches them grammar, and vocabulary.  We teach them how to verbalize what they learn from their Korean teacher.

Since then, similar incidences occurred in my other sixth grade classes, and I reacted similarly, and they fearfully reacted to my reaction in the exact same way that the first sixth grade class did.  Besides that, teaching has been incredible.  Again, contrary to my thoughts when I first started, I find that I am better with the younger kids.  They are a lot more pleasant, and are better able to channel their enthusiasm to the lesson.  In the younger ones, the defiance that you get with the older kids is virtually nonexistent.

I am going to try something new here.  As many of you know, I have enjoyed Korean professional baseball.  A big reason for that is the language barrier associated with watching other programs on Korean TV.  The language of baseball is universal.  But there is also another reason why I follow baseball so closely.  When I come home from work at 10:00pm, the baseball games are winding down.  And the highlight shows are revving up.  There are three different sports networks here in Korea, and they all have post game highlight shows that air simultaneously every night.  And the only reason that I choose to watch KBSn Sports' highlight show over the others is because of their hostess.  I think I'm in love... 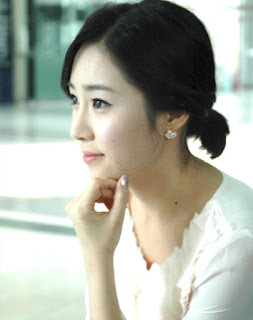 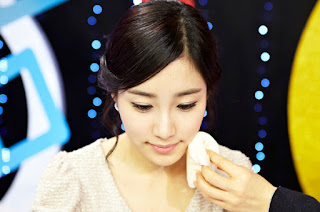 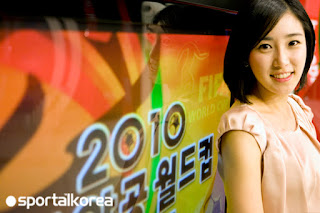 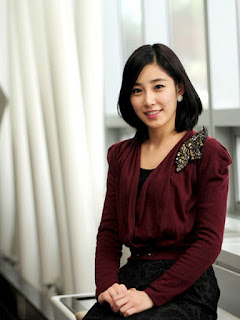 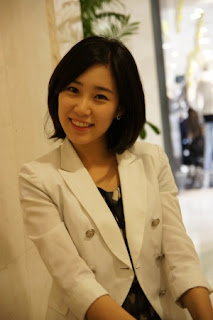 In order to protect myself from being sewed, these are not my photos.  I take no credit for these.  They are photos that came up in google images, under the google search, "KBSn sports."  I downloaded these from other websites.
Posted by Chris Polk at 7:46 AM