I love sports, and competition.  And apparently, it was a big sports week in New Orleans, and I did all that I could to witness it in the best way possible.  The Hornets gave Kobe Bryant and the Lakers all they could handle in the first round of the NBA playoffs before fizzling out in game 6 in New Orleans.  The Saints landed two very promising prospects in the NFL draft in Cameron Jordan, and Mark Ingram.  Hopes are very high in New Orleans for the Saints' second Lombardi Trophy in three years.  And I just finished watching UFC 129 for free on cable TV here in Gwangju.

The Hornets playoff games started at around 9pm central time, and 11am Korea time, which is around the time that I usually finish my mid morning run around the lake.  I was unable catch the television broadcast, nor was I able to catch the radio broadcast online.  The way that I was able to keep up with the game was via www.hornets.com, where they had a live game cast with real time updates in text.  These were the updates:  "Ariza  three pointer, Paul assist...  Bryant fouled by Okafor (2nd PF, 3TF)...  Bryant makes both free throws..."
I'm pretty sure you get the picture.  I guess it beats choosing the K-drama with the most attractive ladies...  well maybe not.  I had them playing simultaneously.  Experiencing the game via web updates was not as exciting as watching, or even listening to the game live, but I found myself fist pumping whenever I would read, "Paul three pointer, Fischer foul..." as the Hornets would take the lead.  And knowing that the Hornets put down the Lakers twice in that series was still exciting and gratifying.
I was able to witness every pick of the NFL Network's live broadcast of the NFL draft live on www.nfl.com.  I watched live every pick of the first round up until the Saints drafted Cameron Jordan the University of California.  "Good pick,"  I said to myself.  Then I went on my mid morning run.  I came back less than an hour later to notice that the Saints had traded up to pick Mark Ingram from the University of  Alabama.  I did a fist pump upon noticing that.  I love how coach Sean Payton knows exactly what he wants, and does whatever it takes to get it.  Louisianians are very familiar with Mark Ingram through LSU's rivalry with Alabama, and we know that he is an excellent running back who will make the Saints a better team.  I immediately switched to the broadcast on www.wwl.com to get the local pulse.  Then I was immediately informed via the broadcast that running back Reggie Bush tweeted, "It's been fun New Orleans."   I got conflicting reports on what he was referring to.  Some said he was referring to his impending departure, and some said he was referring to the Hornets final loss to the Lakers in game six of their series.  I was able to catch Bobby Hebert and Deke Bellevia's thoughts, and I was also able to hear the call-in segment.  Many of the yats were saying, "Good riddance."  And one even said, "Hey Bobby, I think they should make Reggie Bush a wide receivah."
For you non-New Orleanians, natives of metro New Orleans have a unique accent.  Most non-natives say, "Where are you at?"  The last time I checked, it was a five-word sentence.  But the yats made it a two word expression, "Where y'at?"  And hence the name, "yat."  Yats can pronounce their r's if it is at the beginning of a word, but are unable to pronounce it if it is at the end of a word.  Notable pronunciations are, "receivah, truck drivah, leadah, undahweyah..."   And if you are around them for long enough, you will find yourself talking like them.  The yat accent is found to be contagious.
I enjoy the fact that UFC events are not on paper view here.  They are broadcast via cable tv. It was a delayed broadcast, as I caught it Sunday night our time, and Sunday morning USA time.  I simply avoided reading the results, and it was as if I were catching it live.  Georges St. Pierre fought Jake Shields, and appeared rather sluggish, and very unGSP-like.  He could have taken Shields down, had his way with him, and ended the fight early, but he decided to fight via "stand up."  I believe he intentionally did so with his impending superbout with middle weight champion Anderson Silva in mind.  He knows he will be unable to take down Silva at will, like he has routinely done with the other welterweights that he has fought.  I believe GSP is working on his striking in preparation for Silva, and he knew he could keep Shields at bay while doing so.  He threw numerous right hooks, and looked almost uncomfortable doing so.  In previous fights it was rare to see him throw that right hook.
It still annoys me that I am unable to catch new episodes of The Office here in Korea via www.nbc.com/the_office.  I have tried all the other sites that you guys have recommended, and they do not work.  Michael Scott's final episode just aired, and I don't know when I will be able to see it.  Oh well, there are greater tragedies in life.  I just hope that I will not find out what happens before seeing it. 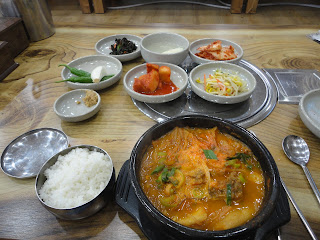 Back by popular demand is the food segment.  As you can probably already tell, Koreans eat a lot of soups.  This is a pork and kimchi stew with noodles.  This was probably the best thing that I have eaten so far.  It was so good that I have eaten it twice.  This particular restaurant is open twenty-four hours, and I spotted it while going for a walk on a random night that I was unable to fall asleep.  On the second visit, I had the same waitress, and she knew that I wanted this particular dish.  I thought, "How did she remember what I ordered?"  These waitresses see numerous customers everyday, but it is probably rare for them to see a foreigner, much less one that returns, so it is probably easy for them to remember my previous orders.  This has also happened at a few other restaurants to which I payed a return visit.  The broth of the stew was rich and extremely spicy, almost too spicy to handle.  The pork in the stew was extremely tender and still on the bone.  Next to it to the left is rice.  Above the rice is fermented bean paste that the peppers and onions above it are to be dipped.  Above the peppers and onions is seasoned seaweed that was very tasty.  The best way that I can describe the next dish over is to call it a cold radish soup.  It was served just as it began to freeze, and was not spicy at all, but was tangy.  When the spicy stew became too much to handle, it was very refreshing to have a few spoonfuls of the cold radish soup.  Next to that is the korean staple, kimchi.  Below the kimchi is bean sprouts, and to the left of that is Radish kimchi.  Again, this was my favorite meal that I have had so far.
Posted by Chris Polk at 9:23 AM

Email ThisBlogThis!Share to TwitterShare to FacebookShare to Pinterest
Labels: Connecting to America, sports