People who know me know that my attention span is relatively short, and they know that I tend to be forgetful.  It is nothing to be ashamed of, nor is it anything to kick myself in the butt over, because I would be doing a lot of butt kicking to myself.  It is what it is.  The big scavenger hunt is happening this weekend, and I was invited to be apart of my coworker Maggie's team.  Naturally, I accepted and was excited about it, because I saw it as a great opportunity to explore the city, and to meet a lot of other foreign teachers.

Last Saturday, I went to my second rehearsal with the praise and worship team at Wolgwang, and afterwards, Jay and his wife, Darlene, took me out to eat.  It was a wonderful meal and we stuffed ourselves.  Jay, Darlene, and the other members of the band are some of the most friendly people I have ever met.  Apparently, Darlene is a fantastic cook, and suggested that she cook dinner for all of us after rehearsal this Saturday.  And again, I excitedly accepted.

Just yesterday, I realized that I had a dilemma.  The rehearsal starts at 5:30pm, and ends at around 6:30.  The scavenger hunt starts at 7:00, the same time that I would be arriving at Jay and Darlene's.  I began to cringe at the realization.  It is not the first time that something like this has happened, and probably will not be the last.  My first reaction was to tell Jay and Darlene that I would be unable to make it, because I previously made a commitment to the scavenger hunt.  It would be a difficult task being that they are Korean, and their English is limited.  How would I explain it in a way that they would understand?  If I were speaking to a native English speaker, I would simply tell them the dilemma, cancel, and hopefully, they would be understanding.  But how do you explain it when there is a language barrier?

Maggie is from England.  She is kind, understanding, and tactful.  I went to her with the dilemma.   I asked her how I should go about explaining it to them when there is a language barrier.  She kindly suggested that I go to the dinner party, which is what I decided to do.

A lot of people can view a particular weakness as a curse.  I do not see it that way.  I see it as an opportunity to take a look at what I have.  And when I do that, I see that I am blessed.  I am blessed to have friends who would think highly enough of me to invite me to a dinner party and a scavenger hunt at the same time on the same weekend.  And I am blessed to have people who are understanding when I need help.  I guess it's a good dilemma to have. 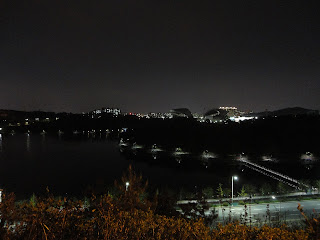 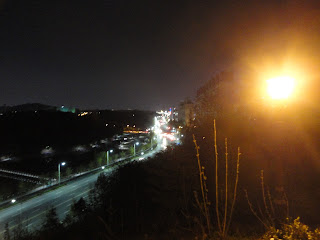 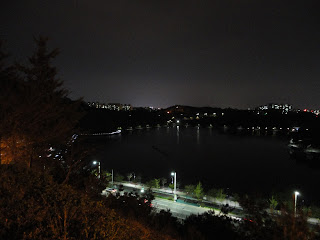 Here are some shots of Gwangju at night from atop a small mountain near my apartment.  Being that it is one of the shorter peaks, I was unable to get shots of the entire city, but this is the area in which I live.  This particular area in Gwangju is called Pungam.  In these pictures, you can see the lake around which I run, the street that I walk along to get to school, and World Cup stadium.  It is a pretty area.  Hopefully, in the near future, I will be able to hike to one of the higher peaks, and get some shots of the entire city.
Posted by Chris Polk at 9:12 PM