I just returned from the grocery store.  I bought around 40,000 wan ($36) worth of groceries and household items.  The grocery store, called Lotte Mart, is very similar to Super Walmart, and is around two miles from my apartment.  It has everything from groceries, household items, electronics, clothes, and whatever else one can think of.  Included in the items I bought was milk, orange juice, grape juice, and a half gallon of water, among other things.  I had 41,000 won in my wallet, which was just enough for the groceries.  I forgot to take into the account the cab fare to get back home, because in Louisiana, you simply hop in your car, load your groceries, and go home, provided there is enough gas in your tank to get there.  And if there isn't you simply go to a gas station, swipe your credit/debit card, fill up, and get home.  Anyway, I flagged a cab down, and to do so in Korea, you hold your arm out palm facing down, and simply flap your fingers.  I loaded my groceries, and when I opened my wallet to show the cab driver the paper, in Korean, telling him were I needed to go, I realized I didn't take enough cash for the ride home.  How embarrassing...  I had the suburban American mindset of a driver, instead having the urban mindset of a pedestrian.  Needless to say, I learned a valuable lesson today, and walking two miles home with two large bagfuls of groceries was a workout.

I found a church that I really enjoy attending, or better yet, Mr. Ryu (Pronounced "You"), my boss, found it for me.  When he picked me up on my first day in Gwangju, I mentioned that I was looking for a church.  He insisted that I attend the english speaking service at the one he attends, called WolGwang Church (Pronounced "Werlgwong").  My first day in Gwangju was a Saturday, and he picked me up the next morning to show me how to get there.  I am glad that he assertively introduced me to the new church, because I love it.  Wolgwang is an enormous church with thousands of Korean members.  It has five services, and one of them being the english speaking service that I attend.  Most of the people who attend it are young native english speaking teachers, like myself.  There are also some Filipinos, as well as Koreans who want to practice their english.  I am blown away by how welcoming and friendly all of the people who attend have been.  For example, on the first Sunday that I attended, after the service, numerous other native english speakers assertively introduced themselves, and invited me to lunch.  I know it is cliche, but I felt like I had known my new friends for years.

Pastor Jeremy, the minister who presides over our service, has preached two truly inspiring messages, one being on Servanthood.  It was based on Mark 10:43, where it says, "...whoever wants to become great among you must be your servant."  His sermon basically outlined the fact that humans naturally want glory, and promotion.  Humans simply would rather be served, than to serve.  And contrary to popular belief in the humanistic nonchristian world, servanthood is the avenue to becoming great in the Kingdom of God.  The sermon segued into a houndout that was given to all who attended the service that particular Sunday.  It listed various ministry opportunities, and their respective points of contact, among them being the praise and worship team.

The one item that I was determined to bring to South Korea was Jake, my Taylor acoustic guitar, simply because I knew I would miss it.  (FYI, I name my guitars and guns.  My black Fender American Telecaster is named Rose.  My SKS is named Rico Suave, and my 12 gauge shotgun is named Bernice.)  I am glad that I brought it, because yesterday, I attended my first rehearsal for the praise and worship team.  The leader is a Korean named Jay, and most of the members are Koreans who are able to speak english, some better than others.   And once again, I am blown away by how friendly, hospitable, and welcoming my new colleagues have been.  There may be a language barrier with a few of the members, but the one commonality that we all have is that we love music, and we love to use it as an avenue to praise and worship God.  And might I say, many of them are college educated musicians, so I am looking forward to the challenge of keeping up with them, and becoming a better guitarist. 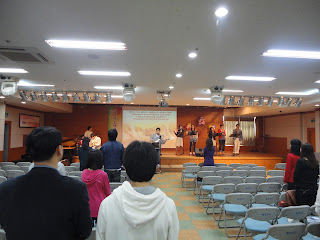 In this picture, you can see Jay in the distance.  He is in the middle playing the white bass guitar in front of the screen. 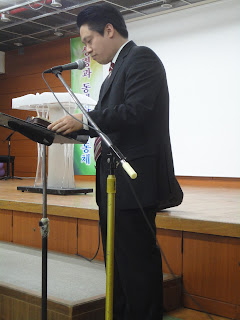 A shot of Pastor Jeremy 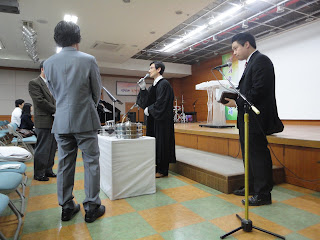 Being that today is the last Sunday before Easter, we had communion to commemorate The Last Supper.  The senior minister of Wulgwang, I forgot his name, presided over the communion while Pastor Jeremy translated.  It was a moving experience.  Wine, instead of grape juice, was served with the bread. 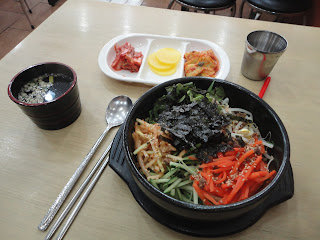 And as always, a shot of a meal that I enjoyed during the week.  This meal was served in a restaurant that is just below my school.  The featured dish in the large black bowl is one of my favorite Korean dishes, called dulce bibimbap.  It is a variety of julienned vegetables including seaweed, cucumber, carrots, and bean sprouts, among other vegetables on top of an uncooked egg, spicy red sauce, and ground beef on a bed of rice.  The black bowl is extremely hot, and everything is meant to be mixed together.  And as everything is being mixed, the egg is being cooked.  In the cup to the left is hot chicken broth, and above it to the right is kimchi, pickled radish, and spicy seasoned cucumber, called namool.  This was a terrific meal for only 4,500 won.
Posted by Chris Polk at 7:55 AM