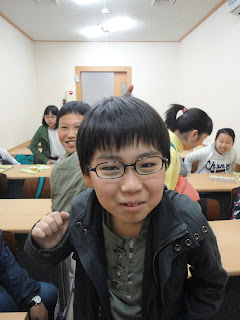 I am getting comfortable teaching my new students.  Every level has a particular required method for teaching the students, and I have seemed to figure them all out.  I have one second grade class, one third grade class, along several fourth, fifth, and sixth grade classes.  Class sizes are relatively small, as I have anywhere from five to fifteen students in a given class.  I am fairly lenient with my students in terms of talking, and other petty disciplinary issues, provided they are speaking in English, and they are not disrupting other students.  I am hard on them if they do not bring their books, or do not do their homework.

I like the fact that I teach at a large school that is organized, because it makes effectively teaching the students easier.  I come to work an hour before my first class, read all of the stories that will be covered in the day, and integrate the stories into the established lesson plans for each class.  Honestly, it is the easiest job that I have had out of college.  Each class is forty-five minutes long, and they are so structured that we as teachers seem to have less freedom of creativity than teachers from other schools.  But I like it that way, because our jobs seem to be less stressful and time consuming, and our energy is focused on presentation of the material.

Each class has it's difficulties.  It is difficult to keep the second graders in their seats, and understandably so.  Seven year olds are energetic.  Melissa is a cute little girl in that particular class who loves to hug my arm, and sometimes, she won't let go.  A lot of the second graders like to get out of their seats to tell me something important, and some seem to have a natural tendency leave their seats to follow me when I am patrolling the class observing group work.

In my third grade class, I have a notorious student named Harry.  He is extremely charismatic, and is very good at making other students laugh.  On my first day with that class, I made the mistake of trying to control him through conventional discipline.  It seemed to endear him more to the other students, causing him to be more of a disruption.  I have recently accepted that Harry is who he is, and attempting to control him is hopeless.  Now, I simply let him do his thing, and he seems to be an intelligent child, who through the correct channeling of his charisma, can be quite an aid to teaching these third graders.

In one of my fourth grade classes, Steve is a student who sits between two girls, Chelsea and Danielle.  I get the feeling that Steve has given other teachers a hard time, but he definitely pays for it in this particular class, because Chelsea and Danielle are relentless in their aggravation.  The two girls seem to be charismatic in their own right because the rest of the class loves joining in on the fun.

An interesting and bizarre tidbit about the fourth, fifth, and sixth graders at my school is that a huge number of them have a dry sense of humor.  A lot of their jokes in class, and in sentence writing are about death.  And I am not talking about one or two students.  The other English speaking teachers warned me about it, and they were not exaggerating.  I have "thick skin," and can tolerate a lot.  But in one particular class, it got to the point where I had to say, "Okay, okay, no more sentences about death."  But as I said in an earlier post, these kids are enthusiastic, extremely kind, respectful, and willing to please.  And they are a joy to teach. 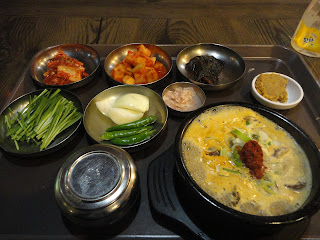 This was a meal that was served in a restaurant near my apartment.  I have eaten at this particular one twice because it has the best Kimchi that I have had so far in Gwangju.  In the large black bowl is a pork stew with hot pepper, bean sprouts, green onions, and other vegetables.  In the covered dish to the left on the bottom is rice.  Above it to the right is onions, and some sort of pepper.  The peppers were considerably spicy, but not so much that they were unbearable.  To the left is the unknown green vegetable.  Above it is kimchi, and to the right is kimchi made with radish.  And in the small dish diagonal to the radish is baby shrimp.  They are extremely salty, and a small amount of them goes a long way.  Above it is the strong tasting leaves to be eaten with the rice, and to the right is fermented bean paste to be eaten with the onions and pepper.
Posted by Chris Polk at 8:24 PM

Email ThisBlogThis!Share to TwitterShare to FacebookShare to Pinterest
Labels: Teaching