As I mentioned in a previous post, dining in Korea is relatively affordable.  Tips are not accepted, and sales taxes are nonexistent.  An elaborate meal with all the fixings usually amounts to around 3,500 - 5,000 Korean won, which is equal to roughly $3.50 - $5.00.  The goal of restauranteurs seems to be to provide quality food, and not to offer portions that are so large that the patron is so full that he/she is barely able to walk out of the place.  The goal seems to be to offer enough to satisfy.  And Korean food is relatively healthy, so the guilt factor associated with eating out is removed.

So far, I have sampled restaurants that serve Korean food, and also those that serve western food.  The western food can be a little pricey.  My coworker, Kirk, took me to a burger joint near my apartment, and I spent around 10,000 won on a "classic" half pound burger, fries, and a coffee, which is about what one would pay in the states for such a meal.  Toppings on the half pound "classic" burger included lettuce, tomato, pickles, onions, a fried egg, and bacon.  And I can honestly say that it was a terrific burger by U.S. standards.
I am more adventurous than most in terms of trying new foods.  The language barrier associated with ordering food has definitely tested that.  For example, on my first day here, I fell asleep on my bed at 5pm and woke up at 4am unable to go back to sleep.  At around six, I began to feel hungry, so I took a walk, and stumbled upon a restaurant that is open 24 hours.  I walked in, and noticed shoes all over the foyer, so I promptly removed mine.  As I placed my boots on the shelf, an umbrella fell, and caused quite a commotion, so I was immediately noticed.  The lady led me to a table, and sat me.  There were no chairs in this particular restaurant, and tables were slightly shorter than coffee tables.  As I sat on the floor, the lady handed me a menu written in Korean, which I am unable to read.  I pointed to a random item on the menu priced at 5,000 won, she said something in Korean that I know would have been translated as, "Are you sure you want this?"  I confidently nodded.  Then she said something else in Korean, which I know would be translated as, "Ok, if you say so..."  Around five minutes later, She brings out a trey of food, including a soup, several sides, including various kimchi's.  The soup turned out to be pig intestine stew.  Again, I am open minded, and adventurous with foods, so I ate it, and it wasn't bad, but it wasn't the best thing that I have ever eaten either.  Kimchi is served with every meal, and the Kimchi served at this particular place was the best that I have had in Korea so far.
During that particular instance, I was still disheveled and unsettled, so I didn't bring my camera to capture the meal, but I did so with others. 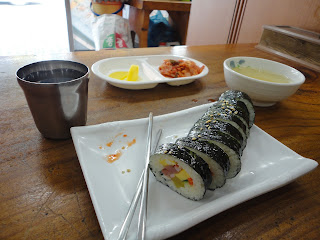 The roll in this particular dish is called Kimbap, and is well liked by native english speakers.  This particular meal costs around 2,500 won.  This variation of Kimbap consisted of rice, egg, ham, crab, cucumber, and pickled radish.  Included in this meal is (clockwise) kimbap, water, pickled radish, kimchi, and chicken stock. 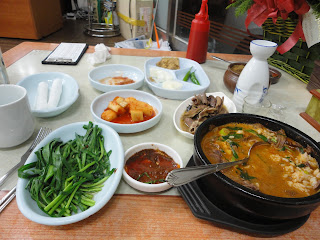 I was feeling adventurous when trying this restaurant, which is across the street from my apartment.  This particular one serves goat and dog.  There was a language barrier at this restaurant, so I had the waitress choose for me.  The soup was a goat stew, which was amazing.  The broth was extremely rich, and the goat was "melt in your mouth" tender. Going clockwise, the dish next to the soup is a sauce in which the green vegetable on the next plate over is to be dipped.  I am not sure exactly what vegetable it was, but they were steamed, mild tasting, and good.  It resembled green onions, but it wasn't.  The sauce was spicy and tasty.  In the next dish up, is a kimchi made with radish, and above it is kimchi that was eaten before the picture was taken.  Next to it is a plate containing onions and peppers to be dipped in fermented bean paste.  The fermented bean paste goes very well with the onions and peppers, and is quite refreshing to eat.  In the dish below it is some sort of pork innards.  I tried it with low expectations, but was more than pleasantly surprised.  It was amazing.  This was a really good meal, and was rather pricey at 7,000 won. 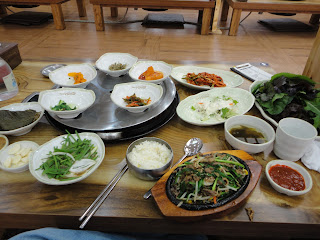 This particular restaurant is near my school.  The sign caught my eye, because it had a picture of a duck.  Again, there were no pictures on the menu, and nobody at this place spoke english, so I had the waitress choose the dish for me.  She made a wonderful choice.   On the wooden dish is beef pulgogi, with bean sprouts and green onions.   Going clockwise the dish next to it is rice.  On the next dish is, once again, the unknown green vegetable with soy sauce, wasabi, and onions.   On the next dish over is garlic to be dipped in fermented bean paste, and the dish above that includes seasoned leaves of some sort to be eaten with the rice.  These leaves have a particularly strong taste.  On the silver platter next to the leaves going clockwise is spinach, spicy pickled radish, tiny dried anchovies, seasoned potatoes, and a spicier version of the the spinach.  On the plate on top next to the silver platter is kimchi.  And on the far end next to the kimchi is a mix of greens to be eaten with the pulgogi, rice, and the spicy red sauce to the right of the pulgogi.  The mix is commonly known as a "lettuce wrap."  Below the kimchi is a common salad with a wasabi dressing, and below that is a seaweed soup.  This was probably the best meal that I have had so far, and costed only 5,000 won.
Posted by Chris Polk at 4:20 AM

Email ThisBlogThis!Share to TwitterShare to FacebookShare to Pinterest
Labels: Food